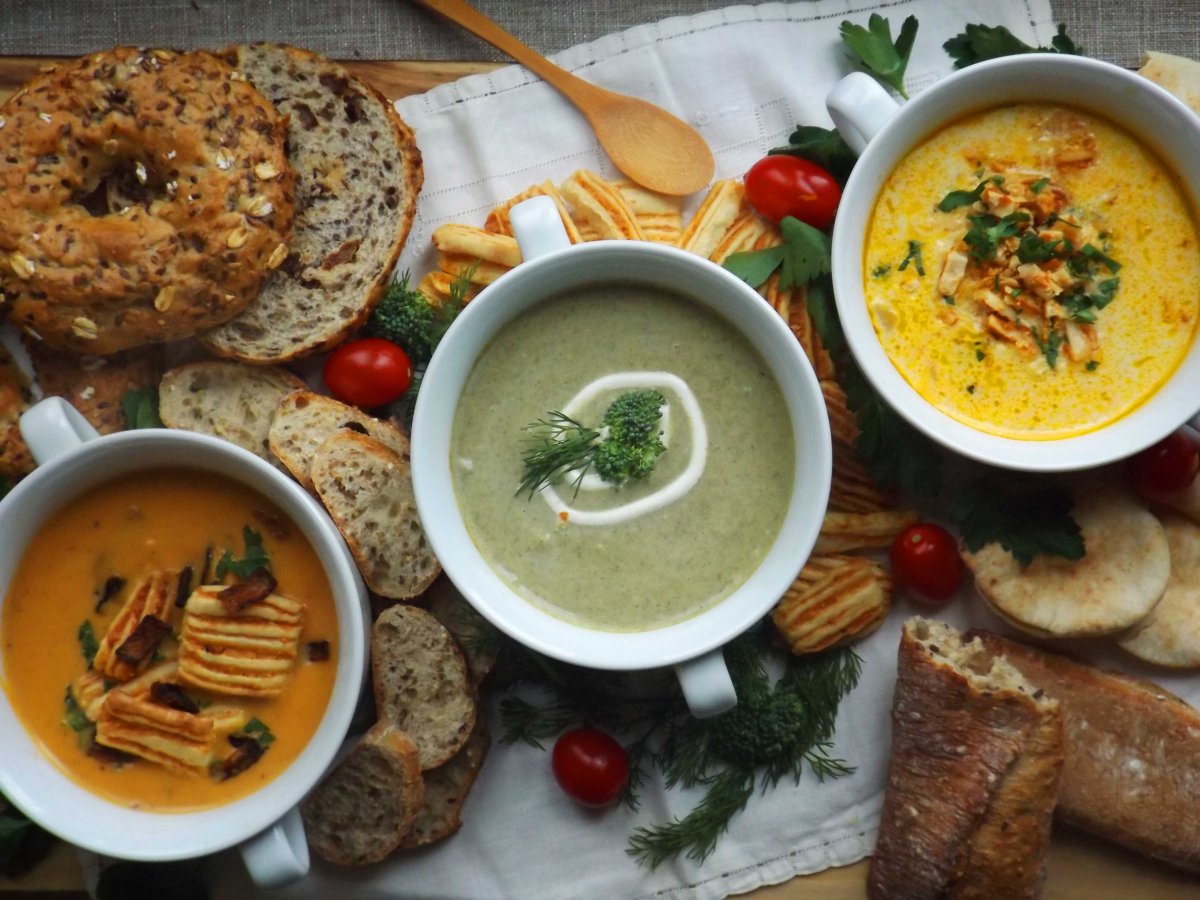 The last few days have been the kind of winter cold that makes me long for a nice hot soup. I love soup. When I was doing my Bachelor of Education at York University, I think I had soup every day for lunch. At least I had it often enough that it became a bit of a class joke. I, however, came to realize what a soul-satisfying source of nourishment soup can be.

As a child, I only remember ever having Campbell’s canned soup and at the skating rink learned what I, at the time, thought of as a really risque rhyme:

Down your leg and in your boot.

My Nain made  the most delicious soup of my childhood but even she started with a can. And that can was Campbell’s Cream of Mushroom Soup, which she combined with her own homemade chicken or turkey broth. It was so good and, if I’m making soup from a can, which is rare, it is what I still do.

Adulthood: The Dawn of True Soup

I don’t think I had a truly homemade soup before taking the “Soup, Salad, and Muffins” course at Bonnie Stern’s cooking school and what a revelation! I found that making soup from scratch does not have to take a lot of time and, minute for minute, yields the most bang for your buck of anything produced in the kitchen. 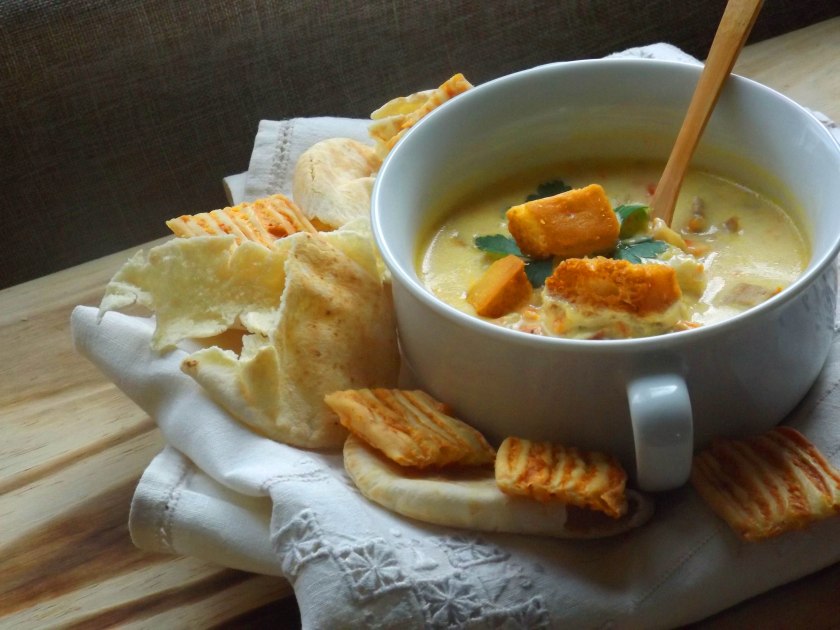 Homemade soup is so easy and can be rustled up from ingredients you likely already have in your refrigerator or pantry. It works just like the Stone Soup in the classic children’s story. I have been making soup from scratch ever since that eye opening Bonnie Stern class. I have also found that soup has connected me to others in some …odd…(and wonderful) ways.

I Soup Therefore I Am

I have also discovered that others are interested in soup as well. Once in 1995, when I arrived in the schoolyard to pick-up my daughter, Deanna, from kindergarten, her teacher came hurrying down the steps to ask me about my chicken soup recipe that Deanna had been raving about. Goodness knows what a five year old can say about soup to arouse such interest, but I had to tell the teacher that this most wonderful soup was Lipton’s Chicken Noodle dry soup mix. (At that stage in her life, Deanna had a strong preference for processed foods). LOL.

Another time, the creator of the food show that used to be held on the CNE grounds, was looking for some sure-fire, nutritious recipes to include in their promotional materials and approached me. She hoped that I, as the mother of five and a recognized neighbourhood good cook, might have something that  would fit the bill. My Carrot Soup recipe was the first thing to spring to mind; its almost impossible to get wrong, very nutritious, and an excellent way to sneak other vegetables past the picky eaters which some children can be. And, so a soup came to be my first officially published recipe.

Over the years, soup and the act of making soup has provided the medium for some great learning and community building experiences. I made Stone Soup with my own kids using the recipe from the story. We would begin by finding a good stone on our way home from school. Once we found a stone that we liked I would give it a good scrub, then boil it for 15 minutes and allow it to cool before starting the soup. After rummaging through the fridge for ingredients we would simmer the ingredients and then puree the soup for a thickened liquid and voilà. Fun Fact: The rock adds nothing, but it managed to trick Deanna into eating a healthy soup. I later made this soup with the children in my classrooms because with Stone Soup, the more that goes into the pot, the better the soup.

In my MumNet group we chopped veggies and made Ribollita to take home while reconnecting after a break.

For the past few years a friend of mine has been active in organizing a group of us from the neighbourhood to make soup in support of Soup Sisters – an organization that provides warm soup to women in shelters and hostels. Most of us met years ago as young mothers with kids at the same school and the soup making has been a great way to touch base now that we’ve evolved beyond the school yard. As we chat and chop away an evening under the guidance of several chefs and soup experts, we produce gallons of soup.

When my mother and mother-in-law were ill and unable to eat most things, especially solids, homemade soup was the answer and for several years I was making batches of soup up to three times a week and sending it out in big, plastic juice jugs. 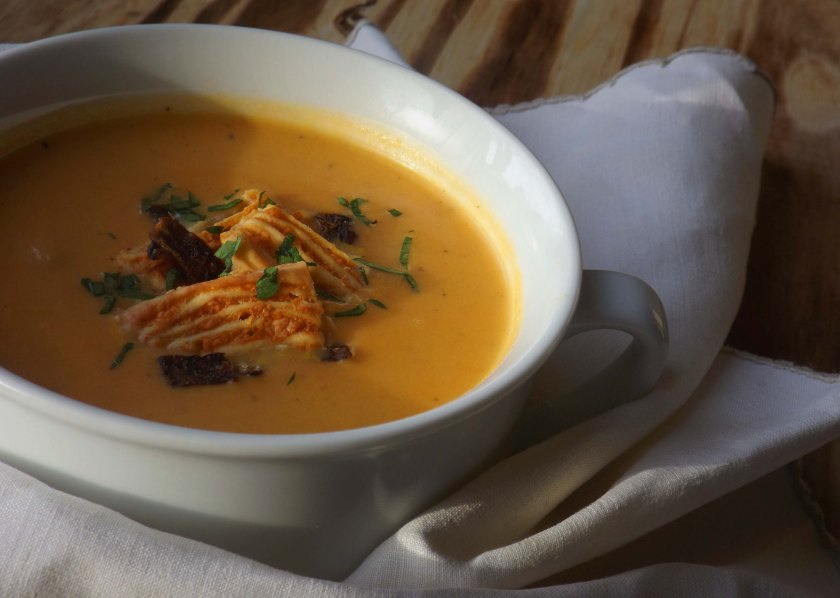 No recipe is required to produce a good soup. At the very least you need water and one other ingredient (and a stone if you’re making that soup). Obviously this will not yield the soup of your dreams.

Soup is the most forgiving thing you can make in the kitchen, allowing you to play endlessly with flavour combinations and textures. About the only rule has to do with the quality of your ingredients. You do not need pristine produce for soup. However, your vegetables cannot have one foot in the disposal bin. As they used to say in the computer world, garbage in, garbage out.

An immersion blender is your best friend in soup making. It allows you to purée your soup right in the pot without having to transfer the hot liquid to a food processor or blender. The only time I forgo the immersion blender is when I want a flawlessly smooth soup. Then, I use a blender or force the soup through a fine sieve – achieving a smoothness that not even a food processor can accomplish. With the immersion blender I just have to shove the wand around the soup in its pot until all the chunks are reduced to a purée. Just be careful to keep the head submerged; otherwise it will splatter the hot soup all over the place.

Over the years I have developed a basic formula for creating a soup that will not fail to satisfy. It goes like this:

With these ingredients you then:

The combinations of things you can do with this basic formula are endless. If you want to add an additional step, you can roast your vegetables before making the soup. This will result in more depth of flavour and will also reduce the cooking time of the soup.

You can substitute any type of cream (from coffee cream to whipping cream) for the evaporated milk for a richer soup. Because of concerns about the fat content of cream, I eliminated it in favour of evaporated milk that provides a better sense of richness and creaminess than a straight milk substitute does.

I also discovered that silken tofu can be hidden in the soup without affecting its taste or texture by pureeing it in with the other soup ingredients. It’s a great way to up the protein and nutritional value of the soup without having someone object that they won’t eat tofu. Hello Canada’s new Food Guide!

The soup, prepared up to the end of step 4 can be packed in freezer bags and frozen for up to three or four months.

Two of my three “go to” soup recipes follow the Soup 101 formula; they are the broccoli and carrot soups below. As you’ll see, with the turkey soup, I’ve provided something a little different but no more difficult and just a little bit more time consuming – but so worth it. Soup’s On! 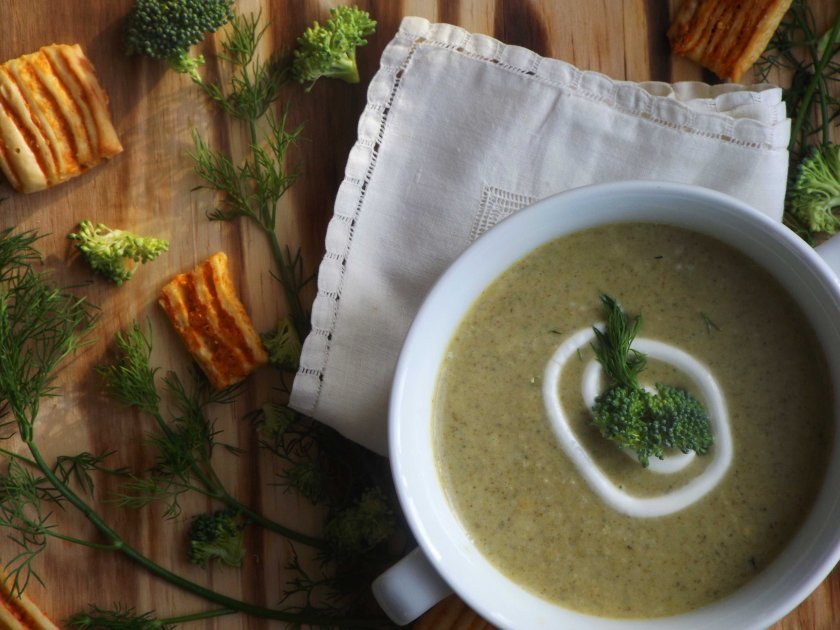 All the chopping for this soup can be done in a food processor or by hand. I  make the soup up to the end of step 4 and then freeze it (up to 3 months). Once defrosted, I then stir in the evaporated milk. For a richer and more caloric soup you can substitute 3/4 cup heavy cream – or other cream – for the milk. If you are using evaporated milk or a cream lighter than 35%, be careful not to let the soup boil as the dairy can curdle. 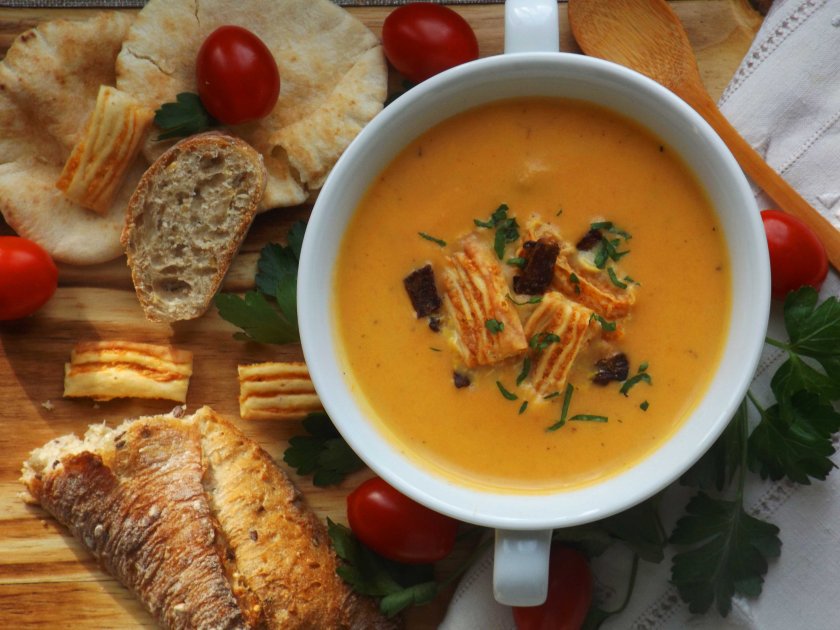 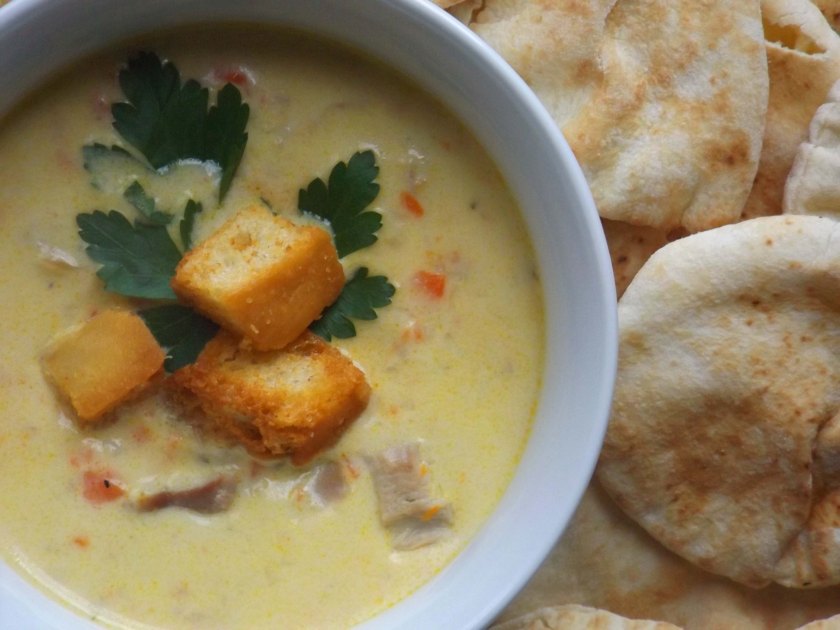 This is my favourite soup for using my own homemade turkey or chicken broth. Of course, you can also use store-bought broth which I often do. The recipe makes a large pot of soul-satisfying soup that freezes well.

*When using store-bought broth, buy the no or sodium reduced type in the 1 litre carton. A little short of homemade broth? Make up the difference with water and increase the amount of chicken bouillon granules by ½ tsp.

** If you don’t have leftover cooked meat, either cook 2 chicken breasts or 6 thighs, 4 turkey thighs, or get a cooked rotisserie chicken. 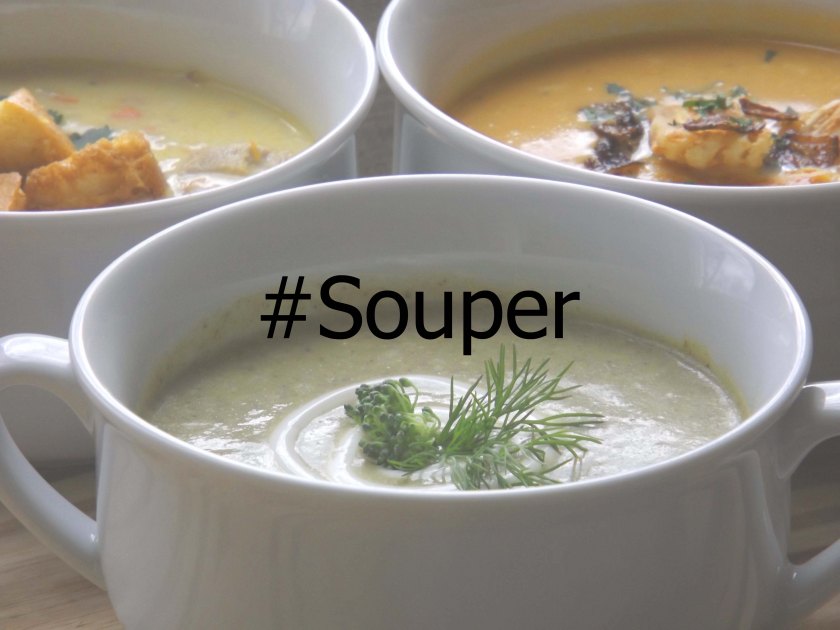 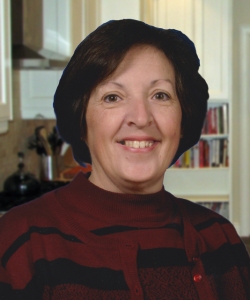 I am recipe obsessed – always in search of the recipe that yields a taste sensation; that has you thinking about its blending of flavours; and that leaves you dying for just one more taste.

My obsession includes a collection of some one thousand cookbooks, stacks of cooking magazines, and boxes, files, and notebooks crammed with recipes. Recently retired (I was a teacher), I can now indulge my passion further.

Other Places You Can Find Me